The Business of Entertainment: Interview with Brimstone

It would be difficult to pin a single hat on Will Kucmierowski. The businessman, better known by his pro-wrestling moniker and now branched out brand name Brimstone, has his hands in it all. Brimstone has created an empire, launching Hound Entertainment Group and publishing over 40 comics, books, spices and seasonings, fragrances, video games, his involvement with the Stan Lee Foundation and more.

I sat down with Brimstone to chat about inspirations, navigating the business side of comics and entertainment and what it is like to survive outside the ring.

Tell me about each thing you’re involved in.

We pretty much do a little bit of everything. Hound Comics publishes over 40 different comic books, kid’s books, webcomics and novels. While touring, we do a foodie show called Food Hound: Tidbits, which spawned a line of award-winning sauces and seasonings – including Bumblefoot’s (Guns N’ Roses) hot sauces. What I personally think is cool, is I have my own line of candy! You know that the candy is uber-delicious considering the company owner’s father is the creator of Jelly Belly’s jellybeans.

If you happen to watch The Big Bang Theory, our backpacks by Eastport are featured in Raj’s apartment for two seasons thus far; so every time they’re filming in that apartment – you see us clear as day! It’s an amazing thing… our sauce and seasoning is on the show as well.

I have my fragrances under the Demeter Fragrances brand, which is surreal as they are iconic in their industry. We have Burn by Brimstone, For Her and For Him. When designing the scents – I wanted to try keeping it in line with everything I do. That being said, you can sense that there is a little heat in there… (Some jalapeño to be exact, as well as hints of dragon fruit) I thought it important to balance it out with a really nice, warm aroma.

The fun thing is that we try our damndest to cross brand everything that we do – for instance, the sauces and seasonings are also branded within the comic book. You’ll see them in Heaven – a bar in the wastelands of Hell… complete with Stairway (get it?). You’ll see Brim and the boys ordering a Grindhouse Burger, or Dust from Hell Wings or Sweet Heat Treat Wings, those are all REAL products! Fans of the series can actually pick up and cook these delicacies right at home. Our tagline is Feed Your Superhero-Sized Appetite, and we’ve won awards in all the saucy cities across the country; our fan favorite hands down happens to be the Sweet Heat Treat. We’ve recently made the addition of new Brimstone branded ultra-hot sauce which is actually upwards of six million on the Scoville Scale. If you’d like a comparison – a chili pepper is about 3,500 on the scale… so you can imagine just how hot it really is. It’s called Necrocide, although I refer to it as liquid death in a teeny tiny bottle. 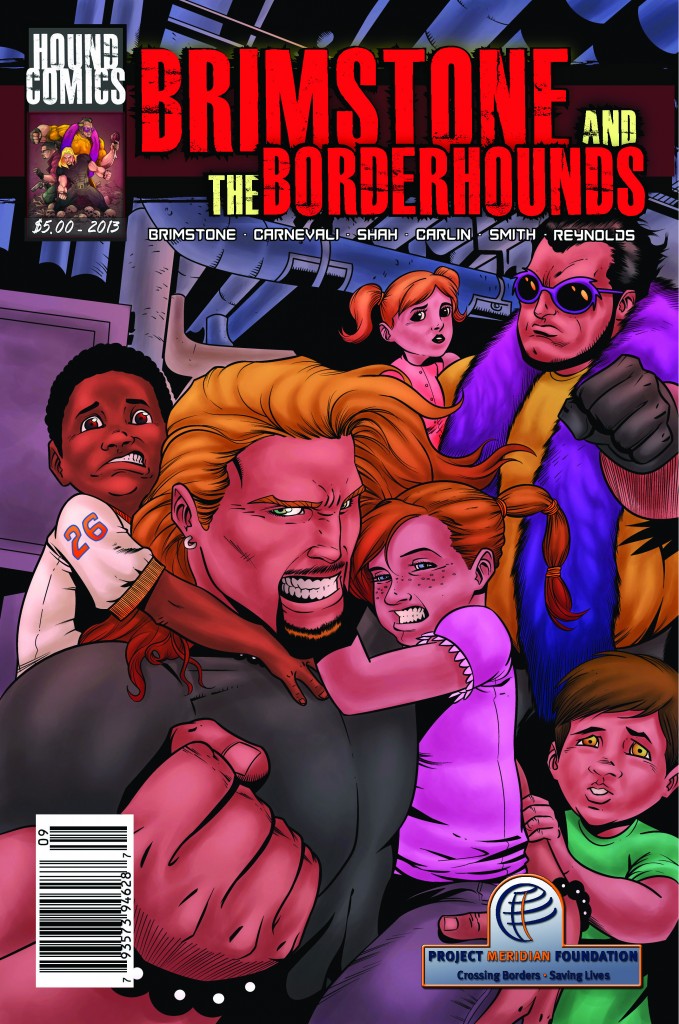 What conventions do you attend and why?

I’ve pretty much done an array of almost everything out there. Some of the favorites I’ve done are Wizard World, Comikaze, The Great Allentown Comic Con, being a featured guest at New York Comic Con for multiple years – I really love them all… they are each unique in their own way. I’ve appeared at countless events ranging from large to small all across the country. Recently, I’ve been getting offers to do overseas and international; but in the last 6-7 months I haven’t been able to commit as I’ve been building up the new corporate office and retail showroom. I’m now on the grind and rebuilding my schedule again which is exciting! I look forward to seeing my con family when touring – it is always great to catch up with friends who I don’t get to see on the regular. I have a list of upcoming events and media that I’m doing including NJ Sci-Fi coming up this weekend on July 11, Haunt Faire, LI Con, Vermont Con, Titletown Comic Con and a lot more. Hopefully I’ll get to see my fans out there real soon! If there is ever an event that you’d like to see me at – it is always a great thing to request my appearance to the convention itself.

It’s a great way and amazing medium to get out there and see the fans, network with industry friends, and let the people see everything we’re doing. A lot of people come up to us and ask ‘What’s Next? What’s New?’ They’re interested in knowing what the next book is or to inquire about what the possibilities could be for the next flavor of sauce. It’s our way of getting out there, shaking hands and kissing babies – it’s great to just to talk with fans. And that’s why I do it, to get out and meet my fans, and it doesn’t hurt to make a few bucks as well.

For me, I’d much rather have someone buy a product and continue to come back because they enjoyed what they purchased.

Although I always have them with me – I’m not normally pushing my 8 x 10’s… I’d rather they pick up a bottle of sauce or a comic. I would prefer to sign that, take pictures, and then hopefully they’ll continue coming back.

Disposable income is so hard to come by these days and people are already spending a lot of money to get into cons. Think of a family of five attending a convention and think about how much they are spending just to get in! I want convention attendees to enjoy their experience and be able to allow their bankrolls to be spread out amongst the entire show floor.

Did you grow up reading comic books?

Yes! Huge X-Men fan, X-Men, X-Force, X-Factor… anything with an X (just not my ex-wife… *laughs*). The Beast is my all-time favorite character and I just love all the mutant books; but it really stinks what Marvel is doing with all the X-characters right now.

In the movies they can’t call them mutants due to the licensing agreements and ownership of specific characters and terms – so they’re opting to kill off the popular characters so that the movies just won’t be as viable for the owners of said licensing and ownerships. In my opinion, they’re the most in-depth characters with the best readability in their entire universe.

I used to get comic books as a kid on the regular… I’d get on my bike or skateboard and ride from my hometown of Uniondale, to the town over, East Meadow, and go to my old comic book shop, L&S Comics. I’d play Street Fighter or Mortal Kombat (and win) and pick up new comics and enjoy others. It was a great experience when I was younger. Now, years later – to see all of the films that are coming out now… I couldn’t have ever imagined! Who would’ve thought we would’ve had cellphones? I mean, as a child – who would’ve thought we would have had such small advanced cell phones that could access this cool thing called the internet? I mean, I thought the best we’d ever get would be the ‘Zack Morris’ phone from Saved By the Bell. 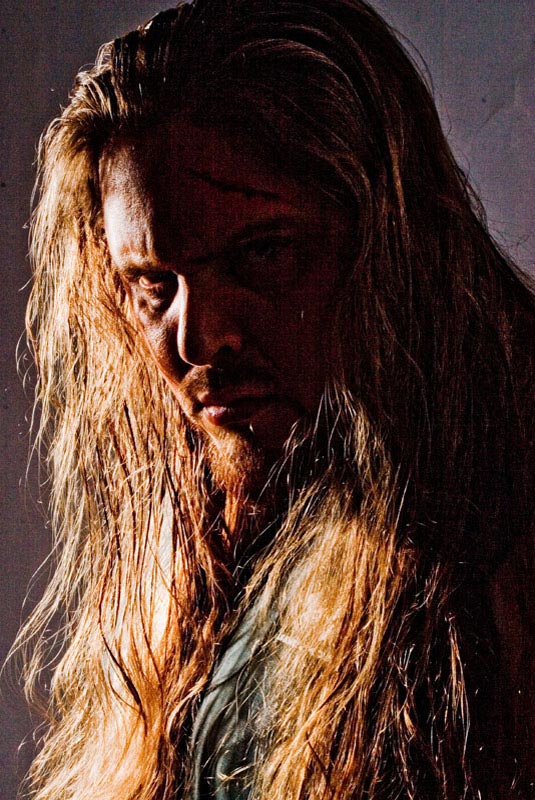 How did you get involved in the Stan Lee Foundation?

I love Stan and his crew and at some point, I met with a few people from the Foundation. They needed support – and anything to do with children especially promoting creativity and literacy; anything that helps kids out – I’d like to be a part of it. Since I do a lot of the shows regardless, I told them that if they ever needed a name to promote at their booth, I’d be happy to come and do it and I started out that way. I’d do booth signings, promote them whenever I go, and then they asked me to be a spokesperson. It’s been a few years and I’m one of the biggest forces out there promoting them. Stan Lee is of course, out there promoting as well, but he’s also limited with his age and everything else he’s involved in. I feel that the Stan Lee Foundation needed a mouthpiece and when it comes down to it, I was the guy for the job.

I’ve been trying my best to get onto The Celebrity Apprentice for quite some time… I think that Trump must fear me (*laughs*). In all seriousness, I would really love to bring the Stan Lee Foundation there.

Going back, how did you start your career?

The way-back machine! Entertainment in general, I was in it at an early age. For example, when I was around five – I was on Sesame Street and Romper Room… I just grew from there. My first love however was music. I went to school for music and then toured the world with it. I was a drummer for many years and can still paradiddle with the rest of them! Music actually gave me the legs needed to truly begin my career in entertainment. It gave me the edge that I have now. Back then, when I was younger, we didn’t have the Internet – we didn’t have the cushy ways of marketing like we do now. My edge in business comes from learning how to guerrilla market, put up flyers, word-of-mouth and person to person networking. A lot of people now don’t understand how to accomplish this and are quite spoiled with the ease of the interwebz. They can’t grasp the communication and the physical work behind a successful project, product or brand.

Speaking of which… I also learned that it’s extremely important to have a brand; a name that is build-able and brand-able. Even if Hound Comics went defunct tomorrow (which it isn’t going to), the Brimstone name and brand will still hold up and I can continue working. It was a very good learning experience in the music career. I also got a good firsthand view of the scumbags and bad people that you’ll meet in business. It’s a shady business, as is wrestling (*laughs*) – with promoters and the like. It set me up for everything else I’ve done. Same manure just a different field. I’m business first, entertainer second. It’s a dog eat dog world and everyone is wearing Milkbone underwear. That’s kinda sorta where you get the building blocks of who I am today.

On the website we have a couple of mini-games and are currently working with an iOS developer to put together some apps. We’ve got Wasteland Wars, a side-scroller and a lot of other cute, fun games online, including a ‘dress-up’ Brim game. I’ve done voice over for several games and projects as well. I love playing GTA, and we’ve got a crew on there, The Borderhounds of course. I also still have a lot of fun playing the fighting games, Mortal Kombat, Street Fighter – both old and new games. I’m a big, big, big Western fan. So Red Dead Revolver is probably my all-time favorite game! 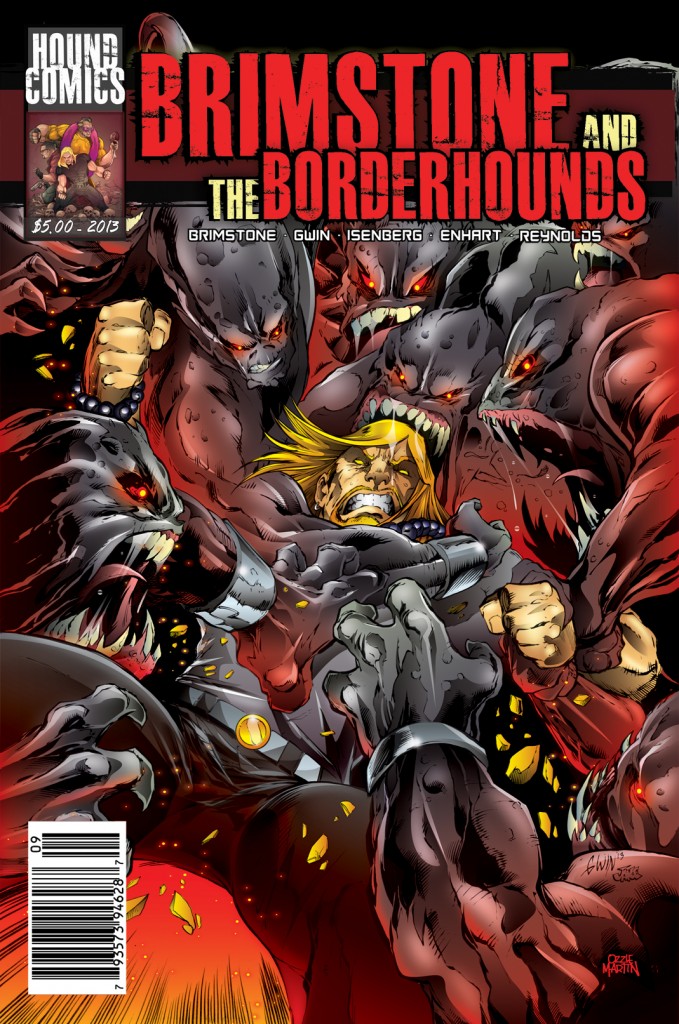 Gay Comic Couples That Can Tie the Knot