Wonder Woman is fantastic; the DC extended universe has a truly great movie and it is about damn time. After films that were flawed but okay (Man of Steel), to obsessively anticipated but miss the mark (Batman V Superman), to films that had great promise but don’t quite measure up (Suicide Squad), Wonder Woman gives Warner Bros. the hit it needs to continue their grand world-building experiment.

After all, some questioned the universe’s longevity were Wonder Woman not to be a smash hit. No fear of that now.

This article does not contain spoilers.

Really, the only bad thing ABOUT Wonder Woman is that finding something negative to write is impossible.

Perhaps the most impressive thing about the film is that it found a way to make an origin story (generally plodding , unless very well crafted) riveting, and despite its two and a half hour running time, almost never dragged.

The narrative is excellent; it clearly shows Diana’s evolution from her origin to Wonder Woman and doesn’t force it. The evolution is natural and unfolds beautifully both through Gal Gadot’s strong performance and cleverness of the script. 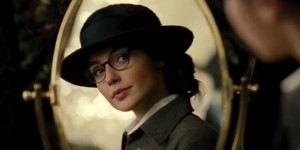 Gal Gadot, who was the best part of Batman V Superman, emphatically proves she was the right choice for Wonder Woman. She is able to play the character with strength, and grace, but with a level of naiveté that was completely befitting the character in the moment.

Overall, though, the movie was well cast, it wasn’t just Gal Gadot. Chris Pine shone as Steve Trevor, giving his grim purpose a flash of life when Diana is introduced to him. Said Tagmaoui and Ewen Bremner have small, but memorable roles, and each is given a chance to play to their strengths.

There is one thing that is confusing about Wonder Woman: how is it possible that a director capable of making such a brilliant film (Patty Jenkins) hasn’t made one in more than a decade?

It was a no-brainer decision to secure her as director for the next Wonder Woman feature, but if the executives at Warner Bros. are smart, they’ll offer her the opportunity to help guide their overall universe, as well.

Wonder Woman is a five out of five.

Become a Spider-Man Know-It-All in a Weekend

The GCE Interview with Stan Lee (and Podcast!)