The Toronto Symphony Orchestra was back for round three last week with its orchestral performance of John Williams’ Harry Potter and the Prisoner of Azkaban. The GCE has had the pleasure of visiting the Sony Centre for the performances of both The Philosopher’s Stone and The Chamber of Secrets, and the next movie in the series was no disappointment.

Conductor Jeffrey Schindler opened the night with an invitation for the audience to join together and celebrate the third movie in the series with cheers, laughter and applause. There were too many moments to count in this one, and so many jeers and boos, I couldn’t help but laugh! (Aunt Marge may have received the largest of them all!) When it came time for showing house pride, he asked the audience to cheer when he called upon their houses and—quite purposely leaving Slytherin until last—joined in so enthusiastically for his own house that the Slytherins went as wild as Durmstrangs.

I wasn’t sure what to expect with this performance, as there is only one theme (Buckbeak’s) that stands out in my mind when I think of Prisoner of Azkaban. Watching it through, I realized why: the music in this film (only one of two Harry Potter movies to receive an Oscar nomination for best original score) is almost entirely narrative. The music is synced so closely to the action that it didn’t need standalone themes to help fill in the story and punctuate certain scenes. Schindler faced a monumental task… 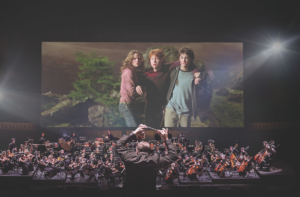 And did he and the TSO ever succeed. The performance was timed perfectly to the film. From my vantage point I was able to see the screen on which the conductor could see a 3-beat countdown for each piece. Personally, I don’t think three beats is nearly enough time but the TSO was so well-rehearsed that they matched Alfonso Cuarón’s visual work beat for beat, note for note. Their most impressive feat may have been when the Amadeus Choir and Elmer Iseler Singers sang Double Trouble in perfect sync with the choir singing on screen!

I must say, a new perspective I gained on this viewing was that—because the movie is on its own track and the music is emphasized by the live orchestra—there were elements to the score that I had never noticed. I look forward to reliving it at home, especially with the later, more serious movies in the series. I love these movies so much, I couldn’t believe I was able to find something new to love about them after all this time! (Always!)

With the Prisoner of Azkaban wrapped, I certainly look forward to Toronto experiencing the next two movies (which feature some of my favourite themes from the series!). You can already grab tickets for The Goblet of Fire, at the Sony Centre November 15-17, 2018.

As a kid I received a gift of PoKéMoN Red and a GameBoy Colour, watched Sailor Moon religiously, stumbled across Digimon one faithful Saturday morning and my path to geekdom was started. Harry Potter and The Lord of the Rings came a few years later with the new and revolutionary Xbox console, anime and manga, soon after that. My dad was the Star Wars fan, my uncle, Star Trek (so naturally I was introduced to both) and my unhealthy Hallowe'en addiction quickly turned into cosplay. My newest poison? Game of Thrones and The Walking Dead. Gaming, anime, fantasy, sci-fi, horror and cosplay… I've got this.