Spartacus: A Game of Blood and Treachery, GaleForceNine’s first (and best) boardgame is getting a re-release.

The classic game of intrigue and blood has been out of print for some time; GF9 originally based the game on the Starz show Spartacus but the licensing agreement lapsed, and so the game was allowed to go out of print. But that time wasn’t wasted, as GaleForceNine went to work on revamping the game to revitalize the IP.

Gone are the splashy images of flowing dresses and well muscled actors, replaced now by hand drawn art that may even enhance the experience overall.

The limited images we’ve seen from the press release look good, but we don’t know if any further revamping of the 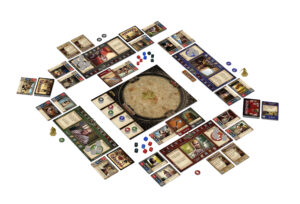 game was included in the second-edition. Are any rules changes incoming? We just don’t know.

There are a few places that could use refinement, but we’ll need to wait until April to find out whether they were made.

International fans of the game got some welcome news, as the game is launching with five editions including English, French, German, Spanish, and Polish; given the game’s subject matter, you may have expected to see an Italian edition, but I digress (I kid, of course.)

It includes 4 new miniatures, cards, and a whole lot more.

Here’s some of what we’ve seen that’s new:

All will be revealed in April 2021 (currently scheduled for April 17).

Superman and Lois Soar in Debut, renewed for S2

The Hardy Boys Find a New Mystery on YTV