It’s a long trek down to the basement of the Ontario Science Centre, passing darkened exhibits waiting for minds young and old alike to discover them tomorrow. But tonight is so nostalgic one can practically feel it wafting from the next exhibit hall; this is Game On 2.0. Welcome to Nerdvana.

Our first topic of the night was mobile gaming versus console gaming and whether consoles are becoming obsolete. With products like the PS Vita and remote gameplay, we are seeing more of a “leave the living room” trend, though it will hardly make consoles obsolete. Even gaming on smartphones that are quickly becoming the Swiss army knives of mobile gaming, for me there is nothing that can beat the feel of a console controller in my grasp. That can’t be said for Ryan Creighton though, who is a father and insists his only gaming time is in the bathroom while he’s on the toilet… 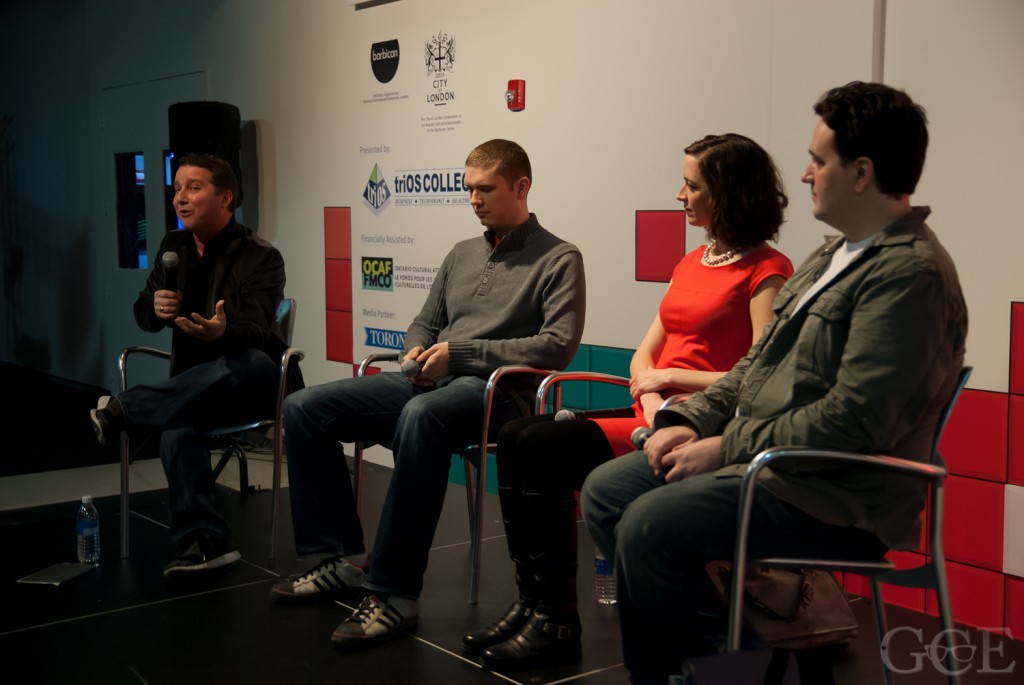 From there gears switched to education and gaming and involving gamification in the workplace and classroom. In an educational environment, giving out gamer points can reward overachievers and alienate the underachievers. According to Sarah Grimes, there is not enough evidence to support either way if gamification in the classroom is beneficial of detrimental. In the workplace it is a different story, where sociopathic behavior is rewarded.

The topic of violence in gaming was brought up and of course it caused a long debate on whether or not games make people violent. Only 9% of games on the current market are rated M for mature, but Ryan Creighton believes “when you ramp up the violence, you ramp up the realism.” James Everett, however, was quick to counter. Currently working on Tom Clancy’s Splinter Cell: Blacklist, Everett explained that it was partially a conscious effort on Ubisoft‘s part to cut down on the violence in the game and partially protagonist Sam Fisher’s personality that allows players to subdue their opponents by other means. In a game like Splinter Cell, sometimes it is necessary to be stealthy and opponent deaths may alert others.

By now everyone was getting anxious to get into the exhibit (maybe it was because we’d all had our fill of “Gamer Grub” by Biosilo Foods Inc., the performance snack enriched with vitamins and neurotransmitters) but first we met a few members of Barbican, Patrick Moran, an exhibition manager, and Barry Hitchings, an exhibition consultant, responsible for bringing the Game On exhibition to Canadian soil.

Game On 2.0 is the largest touring exhibition on the evolution of video games in the world. With more than 150 playable games, the exhibition charts key game developments from 1962 to present day; from the very first commercial coin-operated pinball game to the latest in virtual reality, 3D and multiplayer games. In addition to the playable games, visitors will learn about the game design, development and production, consoles ans other gaming mediums.

The exhibit, in short, is Nerdvana.

With Space Invaders and Phoenix decorating the walls and the exhibit darkened for optimal screen viewing, I was like a kid in a toy store with a hundred bucks, not sure where to go first. After a brief stroll through the exhibit to see where everything was, it was time to start playing. I was reunited with a game that saw me through my pre-teen years, Goldeneye 007 for Nintendo 64. Our event photographer and contributor, Marc, finally got to play Mappy, something he’d been looking forward to all week.

There were so many recognizable games and definitely something for everyone. We managed to try an array of games from Tomb Raider (32-bit on Sony Playstation) to interactive games like Daytona USA Twin Unit Cockpit, Dance Dance Revolution, and Virtua Tennis 4. I managed some time in on the Pac-Man and Donkey Kong arcades, played a Space Riders pinball machine and reunited with Sonic the Hedgehog. I also, miraculously, avoided knocking anyone out while playing tennis, though I’m sure there’s a bad photo out there somewhere of my game face.

Possibly the most drawing aspect of the entire exhibit was the Virtusphere where visitors will experience complete immersion in virtual reality. A three metre hollow sphere that allows a user to enter and run freely while wearing a wireless, head-mounted display, the Virtusphere offers the ultimate within-the-game locomotion interface. According to the Discovery Channel, “this new invention is a virtual reality tool that comes closer than most to the Holodeck of Star Trek fame.” There will likely be a line as room only allows for one operator at a time, but believe me when I say your wait will be well worth it! (Check out photos of the Virtusphere in our Game On 2.0 gallery located HERE )

I got some one on one time in with Sarah Grimes, who I spoke to about women in gaming. Video game developers have had increasing interest in hiring women, though Grimes has said it’s a trend we have seen before, and the approach to get women into the development side of gaming is stereotypical. “More women equals more success,” says Creighton.

James Everett of Ubisoft speaks with Stephanie from the GCE about gaming.

James Everett also lent some time to talk about how it may be getting harder for people who have never played a game before gain interest because of the controller. “If you look at a controller, here you have four points of action,” pointing to the XYBA buttons on a nearby controller, “Then you have two analog sticks, a d-pad, two shoulders and two bumpers.” Luckily, if controllers are an intimidating factor, computer games are sometimes easier to help with integration and with sites like Steam, hundreds of games are available for both console and PC.

The best part of the entire exhibit is that it fits so well with the Ontario Science Centre and with Trios College on site, those interested in a future in game development or design can talk to the recruiters of the college. The exhibit is great for anyone young and old, and parents should take note that only two games in the entire exhibit are rated M for Mature and there are many games for even the very young, such as Big Birds Egg Catch. The exhibit is included in the price of admission for the Science Centre, and it runs from March 9th until September 2nd. “More than just a game”, you’ll learn something too! I thoroughly enjoyed this exhibit, and I’m positive every attendee will too, even if it’s just for a glimpse of that nostalgia.

Follow the Ontario Science Centre on Twitter at: @OntScienceCtr and find out more about Game On 2.0 by following the #gameonscience hashtag.

Tickets for the Science Centre can be purchased on site, at http://www.ontariosciencecentre.ca or by calling 1-888-696-1110.

I was raised in a pretty geeky household on a daily dose of Bill Nye the Science Guy, X-Files, and Jeopardy (not to mention Power Rangers and TMNT). I'm an amateur cosplayer and collect anything and everything related to The Walking Dead. I love Star Wars, Star Trek, Batman, Deadpool, the Avengers... When I'm not at conventions, museums, science centers or playing video games, I'm a full time makeup artist.