Probably best known for writing and directing the horror comedies WolfCop and its sequel Another WolfCop, Lowell Dean has switched gears to a more action based movie in SuperGrid. Recently we had the chance to talk with Lowell about the movie while it was playing at the 2018 Blood in the Snow Canadian Film Festival.

So where did the idea come from for SuperGrid?

Lowell: SuperGrid was apparently or 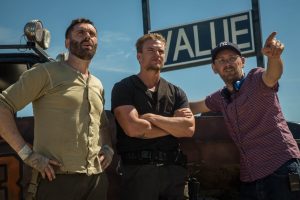 iginally developed by Leo Fafard, who’s the lead actor and Hugh Patterson, the producer. They wanted to make a brothers road trip movie and they brought on Todd McCauley, he’s the scriptwriter of the group, and he developed this post-apocalypse action movie. Also, they brought on writer Justin Ludwig and he helped flesh out the final pieces of the puzzle, and then about a year ago he asked me, do you want to make this movie, so I was brought on last.

Was this a difficult movie to make?

Lowell: Yeah, it was a very difficult shoot. I think sometimes when people hear you had a million dollar budget, I mean if you’re outside of film that sounds good, but if you’re in film you know that is not a lot of money. For a million dollar budget you could probably make a modest drama about two people in a house, but for our million dollar budget, we had multiple car chases and shootouts, explosions, a war scene, and over two hundred VFX shots to try and build this post-apocalypse world. It was definitely over ambitious but we all knew that going in so we just pushed ourselves to be as crazy as we could but yeah, it was a hard shoot.

Were you looking to do an action movie like this or when it was brought to you it was just too good to pass up?

Lowell: It was brought to me and it was good, I liked the people involved and honestly, I didn’t want to do a post-apocalyptic film. I kind of felt like you know, when everyone kept saying 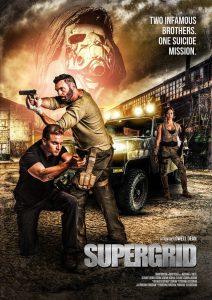 oh, it’s like Mad Max, but there’s been a Mad Max and it’s great, and at every budget level, you know what I mean? I actively went out of my way to, because it’s already lumped in that category, it’s my job to surprise people and instead I looked for influence elsewhere. I looked at Saskatchewan which I think is underrepresented visually, and I looked at the Western genre and said, I’m making a future Western. I looked at the idea of making a Western, the love of Saskatchewan and John Carpenter films, that was going to be my wheelhouse and people can find Mad Max in it as well, quite easily, but I’m looking elsewhere.

The overall look of the film is marvelous. Was getting the right look visually a tough process?

Lowell: Yeah, it was. It was a collaboration and I think one of the best decisions and additions was having Michael Jari Davidson as the director of photography. He was someone who I’d worked with on the second WolfCop film, he has a great eye for genre filmmaking and he’s not from Saskatchewan so he really saw the province from a different way. We would walk past things, take them for granted, but we would see in his eyes the excitement, like wow, look at that sunset or look at this angle, so I think that was really important. Also, the decision to shoot with anamorphic lenses, which is something he really pushed for, because we talked about Escape from New York and Mad Max and he’s like well, if you shoot in anamorphic and use these older lenses, we used these lenses from the seventies, it’s going to immediately subconsciously give you this feeling that something is a little off. It’s like, even if you’re shooting a house in 2017, those lenses just make it feel a little off, then we throw in a little post-apocalyptic stuff in the frame it takes it up a notch.

Lowell: Yeah, I mean seventeen days, it was an impossibility almost but we’re used to biting off more than we can chew. There were some days on set where I was the only person who knew what was happening, it was just me and a camera running around saying do this, do that. You just have to abandon the typical process of filmmaking sometimes, using digital and not needing to press stop, just keep recording. You think that ok, the editor will just figure out later except half the time it was me editing so I r 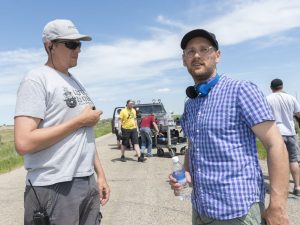 eally ended up dealing with my own mistakes.

Now that you’ve made a film like this has it piqued your interest to do something similar for your next movie or do you want to go off and do something totally different?

Lowell: After WolfCop 2 I was like, this is too crazy, I want to do something more modest, and then I did this which is also crazy and not modest so I’m really hoping that whatever I do next isn’t seventeen days of war, chaos, and explosions. I love it, it’s really fun, but I’m longing to try something different and not so impossible.

You mentioned the Mad Max comparisons. Did you have trouble marketing this film, in terms of trying to get the message out about what the movie was really about?

Lowell: I think you’re right, even now I think we’re having a problem getting the word out about what this film is. I think because our last two films, with so much of the same cast and crew in the world of horror comedies, I think everyone is expecting this to be WolfCop. The biggest issue we’ve faced is what is this film, and I think that’s going to be the challenge, maybe it’s going to be a sleeper and people are going to find it later but yeah, it’s definitely a hard film to define. That’s why we keep branding it a future western because I feel that’s the simplest way to explain it so I hope that helps people.

It will be available to stream through iVOD starting December 18th across both Canada and the U.S.