There is only one way I can describe this weeks The Walking Dead and it is that this episode is absolutely breathtaking and unfortunately heart wrenching. With the finale of the season looming only one week away, we are taken on an emotional ride. As always, there are FULL SPOILERS in this article.

The show opens with Daryl and Rick discussing Merle’s possible loyalty to the group when they go to war against the Governor (and it’s hard to ignore the old man zombie in the background that looks like the little old man from Pixar’s Up), needing to know that the man will fight on their side. Daryl is sure of it, but Rick wants to talk to Merle anyway, needing to know where he stands on the situation.

Rick goes to find Merle, who is in another cell block ripping up mattresses in search of some meth. The former sheriff notes that he doesn’t believe deep down that Merle is a bad person, he just makes stupid decisions and doesn’t even understand himself. Rick also contemplates giving Michonne over out loud, figuring the Governor might honor the agreement if he gets what he wants. Merle, knowing full well how ruthless the man in charge of Woodbury is, tells Rick what her fate might be if she is handed over, though doesn’t seem opposed. He does think that Rick will cave when the time comes to turn Michonne over, even if he seems adamant about it at the moment, thinking it might be the right thing to do in order to save the group.

Later, Carol questions Merle about his loyalty to the group; if he is ‘with them’ and if they can count on him. Merle simply states that he is here for his brother and that’s where his loyalty ultimately lies. While they’re inside, Glenn and Daryl are outside, prepping gates for the inevitable arrival of the Governor and his men. They talk forgiveness of Merle’s actions for what he did to Glenn, but the younger man states he will never be able to forgive Merle for giving Maggie over to the Governor because of what he did to her. (shouldn’t they be concerned that what was done to Maggie at the hands of the Governor will happen to Michonne if they give her up, but ten times worse?)

In the guts of the prison some time later, Daryl finds Merle who is, again, snooping around for drugs. They have a Dixon brothers heart-to-heart, where Daryl lays everything out on the table for his brother, including his loyalty and willingness to follow Rick, which of course makes Merle ask, “Do you even possess a pair of balls, little brother? Are they even attached?” Daryl confesses that all he wants is his brother back, and it’s a rather moving admission.

As the plan for returning Michonne to the Governor is mulled over, Rick has a change of heart like Merle predicted, but fails to voice that it’s been called off before Merle takes matters into his own hands and takes Michonne himself. While they walk along a road and Merle shows interest in a potential vehicle to get them there faster, he talks to Michonne and she makes a great observation about him and the guilt he says he carries; “people who are really bad, and do despicable things, they don’t have weight; they’re as light as a feather. They don’t feel anything.” 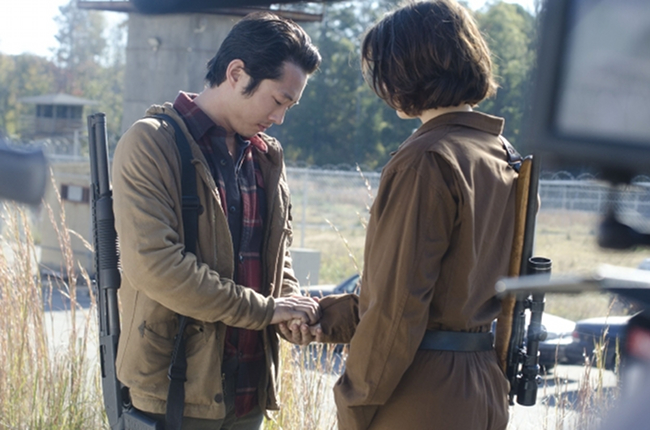 The “we’re in a zombie apocalypse and might die tomorrow” kind of proposal.

Back at the prison, Glenn asks Hershel for his blessing to marry Maggie; they won’t have much of a wedding, of course, not in a zombie apocalypse, but the sentiment and heart is there. Of course, Hershel says yes to the young man. Later, we see Glenn looking over the walkers at the fence, carefully surveying them until he finds the right one. He cuts the entire ring finger off of one walker in order to harvest a wedding ring for Maggie, not wasting any time.

Merle and Michonne hit a rough patch at a motel on their way to Woodbury; Merle stops to hot wire a car and accidentally sets off the car alarm—a dinner bell to any walkers in the near vicinity. Michonne crushes some walker skull then decapitates another one using the wire she’s bound to a post with. Just when it seems like they are overwhelmed, though, Merle snaps into action and kills some walkers before cutting Michonne loose and playing gentleman by opening the car door for her, despite the fact he’s still in the process of kidnapping her.

During the drive to the meeting point, Michonne tries to convince Merle that the Governor, while he saved Merle’s life when he was sun stroked and less one right hand and her words finally seem to have an effect; Merle cuts Michonne loose, gives her the katana and tells her to go back to the prison to get ready because he has something he has to do on his own.

One might think that Merle was going to do some good; instead we first find him in the car with some whiskey, listening to Motorhead. Changed man, or just after some whiskey? He rolls out, slowly, gathering as many walkers as he can in tow with the music cranked up as loud as the stereo provides. At first, I thought he might be headed to Woodbury to drive the car through the front barrier and let all the walkers in, but it seems the bad man turned good (if even temporarily) has other ideas. He drives the car to the meeting point where Rick is supposed to bring Michonne (the silos where they met two episodes ago) and rolls out, running inside the meeting point. The noise continues to draw the walkers, but also draws the attention of the Governor’s henchmen, who Merle begins picking off with his rifle as they come into view.

This is Merle’s swan song, and we all know it. He knows he’s going to die, or at least has an inkling. His fate seems sealed when the surviving henchmen and the Governor find him, and the Governor lets his rage fly on him, stomping on the older Dixon brother, but he holds his own, at least until the Governor bites the man’s ring and pinky fingers clean off.

“I ain’t beggin’!” Merle shouts at the man, who simply raises his gun and, presumably, shoots Merle.

Back at the prison with war looming on the group, Glenn doesn’t propose romantically, or even really at all, but it’s a yes of course and it’s set against a rather picturesque sunrise that would have been perfect had the sight and sound of walkers nearby not ruined it. Then again, this is the zombie apocalypse and everyone might be dead tomorrow for all they know…

Rick does his usual speech only this time it’s not a Ricktatorship, he’s not their leader and he can’t be—they all have their choices to make in this world and he can’t be the one to lead them all the time. He doesn’t know where Michonne, Merle or Daryl are, or if they’re alright. All he knows is that they’re going to war, and no one knows if they will survive.

Back at the silos, Daryl sees the carnage laid out in front of his eyes; some walkers and some victims shot in the head. It isn’t until he ventures further that he sees a sight that rattles him to his core: hunched over a former human being currently serving as a buffet, is Merle Dixon. The older brother lifts his head, dead eyes staring back as he slowly rises to his feet. Heartbroken, Daryl shoves walker-Merle twice before knocking him down and stabbing him repeatedly in the head. This is a very emotional scene to watch—I’ve liked Merle for a long time and I was thrilled for his return. To have Daryl put his brother down seemed like the only way I could see walker-Merle go out, and Norman Reedus plays his anguish so well it’s hard to handle. I’ll admit it—I had tears in my eyes in that scene and it was almost as bad as when Sophia walked out of that barn in season two. 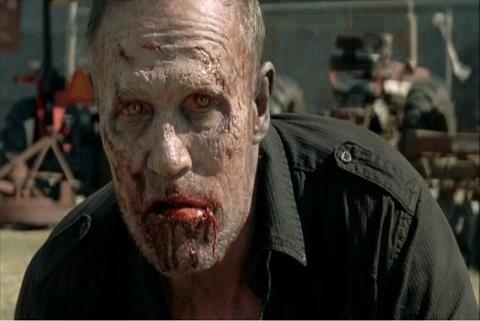 In Talking Dead following the episode, Michael Rooker summed up Merle’s intentions, as well as spoke about his true alliance. He wasn’t in it for the prison, and he didn’t care about Woodbury—he was in it for Daryl; his heart belonged to his brother and vice versa and that’s how I’ve always felt about the situation.

This might easily be the best episode of the season, though I am going to miss Michael Rooker as Merle Dixon very dearly.

Doctor Who Season 7A: In Review and Recap

I was raised in a pretty geeky household on a daily dose of Bill Nye the Science Guy, X-Files, and Jeopardy (not to mention Power Rangers and TMNT). I'm an amateur cosplayer and collect anything and everything related to The Walking Dead. I love Star Wars, Star Trek, Batman, Deadpool, the Avengers... When I'm not at conventions, museums, science centers or playing video games, I'm a full time makeup artist.