Before its current, successful, adaptation on the small screen, Preacher held a special place in development hell…which is perhaps fitting, given the subject matter.

Multiple attempts to kick start the comic as a film or television show failed; even high-profile creators like noted comic-nerd Kevin Smith and academy award winning director Sam Mendes couldn’t move the project past the development stage. At one point the project even had a star attached, with James Marsden (of X-men fame) set to star as Jesse.

The rich and bending story was ripe for adaptation (which is why people kept trying to do it) but nothing stuck.

Best known for their comedy writing, and Rogen for his comedic acting, neither creator would have been first on anyone’s list to be the drivers of Preacher’s success; and yet here they are, three excellent seasons down, and hopefully three more on the way. 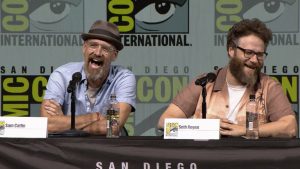 At San Diego Comic Con 2018, Rogen took slight (in that charming, aw shucks Canadian manner he seems to have perfected) issue with the suggestion that he and Goldberg were best known for comedy.

Rogen gave credit to the failed adaptations that came before, saying that the team was actually well-served by the previous attempts. He thinks that their adaptation succeeded, where others failed, was precisely because of the injected comedy.

“[I think] the previous attempts were missing that comedic element; [comedy] makes the show more digestible because we’re doing it with a wink and a smile,” Rogen said.

Rogen could be on to something; after all, the religious undertones of Preacher could easily alienate viewers, and and more than one previous attempt was shelved for being too dark. In fact, HBO passed on a Preacher adaptation for precisely this reason.

So when Rogen was asked about the reaction these two comedy guys got when pitching a show with such weighty, undertones he said, “we were surprised by how open people were to us doing it.”

Ultimately, the faith showed in their vision by AMC was rewarded: Preacher is an engrossing show, that acknowledges the comics, but rewards fans with a sprawling and deeper story than they could have imagined. It is an excellent show that has no right to be as good as it is, given the development hell in which it lived for so long.

And as for any advice Rogen was given before diving into production, he said one piece in particular stuck out: “don’t blow it.”