Two weeks ago I sat down with Lois Lane: Fallout, the newest collaboration from Switch Press/Capstone Young Readers and DC Comics to bring iconic DC characters to the young adult fiction audience. There is much to love in the book as discussed in my spoiler-free review. On May 1st, Lois Lane: Fallout dropped into bookstores.

I interviewed author Gwenda Bond about the legacy of Lois Lane, bringing the character into the 21st century and the impact this character has had on generations of fans.

What is your favorite scene?

One of my favorite scenes is when Lois and SmallvilleGuy enter the Worlds War Three game for the first time. It’s actually the newsprint on the front cover, and it was really fun to write.

My favorite moment would have to be close to the end of the book when Lois is on an upper floor of the Daily Planet looking out over the city and realizing this is her place in the world, and I think that’s my favorite actual moment.

What is your favorite quality in Lois Lane?

Bond: She’s an amazing character and I think she has so many great qualities. She’s a rare character where pretty much anybody you talked to can describe Lois’ general character pretty accurately, and I think that does make her so special. One of the things that makes her so memorable is that she isn’t perfect, she’s flawed, but absolutely believes in her own abilities. She’s never willing to fit in. I think that’s the thing I love most about her is that she’s confident, she will make things right and unapologetic. It’s really refreshing to see a character like that when a lot of women and girl characters are expected to be apologetic. It’s refreshing she’s not ever been a character who has been too down on herself.

How were you approached to write a Lois Lane book, was it your idea or something Switch Press and DC thought would be an interesting avenue to explore?

Bond: The project itself was brought to me by my agent, I was asked if I would be interested in writing a young adult version of Lois Lane. I asked ‘how much freedom do I have with the concept?’ and they said there would be quite a bit of freedom. That was definitely true. I was given the basic premise but I wasn’t given restrictions on where it could be set. She just had to be young and becoming a reporter while solving mysteries.

I thought a lot about what I love about Superman stories, and it is the science fiction spirit. I worked with an editor at DC who knows the ins-and-outs who would go over with me early in the project what the general world of Superman is like. Between the DC editor and my editor at Capstone we were really on the same page.

Will we be seeing Lois Lane in more YA literature?

Bond: I can’t say too much but it definitely has the potential to develop into a series. There’s definitely a lot more stories of Lois I would love to tell.

Bond: I was talking to my husband about this a few nights ago wondering whether boys would embrace this or not. He told me for him, reading comics as a young boy that the two were inextricable – he couldn’t be a fan of Superman if he wasn’t also a fan of Lois Lane. I’ve heard from a lot of adult men how important her character is, and I also have a lot of male readers from my other books who have told me they were excited for this as well. I do hope boys will pick this up, the cover is very inviting for boys and girls. Boys need to see these strong role models and see women and also working women who are smart, vulnerable, equal and capable.

Writing can lead to self-discovery, was there anything you discovered about yourself in writing Lois Lane?

Bond: It’s funny because I think there is more of me in this then there is in anything else I’ve written. In terms of borrowing little things from my past, I had a tendency to get in trouble when I was younger, not quite as much as Lois, but my parents were both principals so I say that’s where my trouble with authority stems from. I was very into elaborate pranks. There’s a reference early in the book with Lois getting into trouble for teaching girls at a sleepover how to play poker – that’s actually me. It was fun to borrow from my life and it made me realize that I don’t think I ever took time to reflect how big a part of my own feminist DNA – how I look at the world and how much of it came from loving Lois as a kid, and other characters too.

I got approached to write this book and Lois is a joy to write because she wants something from every scene, she battles with herself and has a tough exterior, but she’s also on her journey to becoming a confident person. And I certainly was that same way, blustery on the outside but vulnerable on the inside. And most people can relate to that kind of person.

What other superhero characters would you like to bring to the YA fiction?

Bond: I kind of have my hands filled with Lois – who is a handful who is perfect for this for so many reasons. I am excited for Margaret Stohl who is writing a Black Widow YA book, I think it’s going to be amazing. I am writing a teen magician book that is a companion to my Girl on a Wire book that has a bit of Zatanna Zatara inspiration. Also, I really loved the TV show for Young Justice and would love to see a YA version for boys and girls which has them being teenagers and going through all that teen angst and crises. 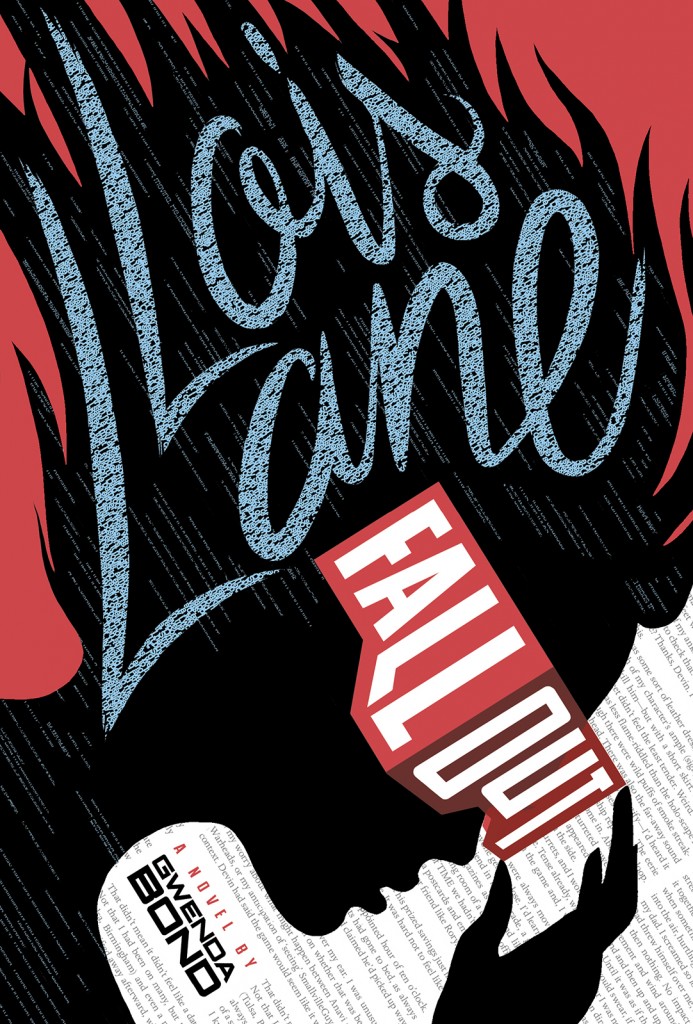 If you could spend a day with Lois, what would you say to her and why?

Bond: I think I would just thank her for being such an inspiration to so many women. One of the coolest things about doing this kind of project is to hear others stories, and to hear grown women and girls talk about what the character means to them, and I think Lois would totally shrug that off and say ‘let’s go get a drink.’

If you were tasked with writing Lois in DC comics – how would she compare to your Lois in Fallout?

Bond: It would depend on the age of the character and what the circumstances would be. I think she’s a fascinating character at any age and I would definitely love to write the young Lois in the comics. I love the Marguerite Bennet one-shot, the story looked at her relationship to her mom and dad. One of my favorite issues is where she interviews Wonder Woman and it would be amazing to write that. You could put Lois in any kind of story and she’s a character can stand next to any character and hold her own. She’s never overshadowed, even with Superman.

What were some of the course materials you concentrated on to flesh out Lois?

Bond: I revisited the Superman’s Girlfriend issues and rewatched original Superman with Christopher Reeve. There was also a Bryan Singer documentary about Lois and in it there are interviews with the different people who have played her. There is a test reel with Margot Kidder that is fascinating and it also has other actresses that were reading for the part – it was really fun to watch. I did a lot of setting research, I had a fake Metropolis resource guide, to get a feel for the different neighborhoods. But as far as researching Lois, pretty early on I knew I needed to not clutter with other versions of character. I did a few weeks research to just refresh, but Lois came fast and revealed her secrets to me.

Sometimes I feel Lois Lane doesn’t get enough credit, she’s been around for 75 years now and is sometimes reduced to being just ‘Superman’s girlfriend’ when she is so much more. What are your feelings on this and how did you address this antiquity in Fallout?

Bond: Even in the comic called Superman’s Girlfriend – main thing is she is a fascinating and interesting character because she’s Lois Lane – and she just so happens to be Superman’s girlfriend. That’s why it’s so much fun to do this and showcase her and take on more than just a sidekick role. I bet that Clark, especially my young Clark, would see himself that way in any regards. They are both about getting the work done and doing what’s right. They both have a lot in common; she’s just as interesting as him. My hope is that girls and boys who haven’t read a lot of Superman comics this would be a way into them and a way to see the character in a new light.

Why do you think Lois has remained such a prominent character in comics?

Bond: There is no other character like Lois Lane. She’s been around just as long, well known, and has what I consider superhero status without enhanced abilities, and without gizmos and gadgets. She’s human all along except for a few stories, but having powers is never the point of the character. She is relatable. She is a driven, fascinating character. Even in Superman’s Girlfriend she had stories that she would be the center of, and there is plenty of untapped potential still.

Lois was ahead of her time in the beginning and I think in some way she still is.

Troubles of a Reluctant Vigilante: The Fox #2 Review

It’s a Dystopian Future for ‘The Brand’