After multiple trailers and teasers, the mysterious Death Stranding is set to reveal it’s secrets on November 8th, 2019.

The game was first revealed by Hideo Kojima at E3 in 2016, just a few months after confirming his departure from Konami and establishing a partnership with Sony Interactive Entertainment. Since then it’s been a long, frustrating and mysterious journey that has spanned many gaming conventions and shows.

Alongside the release date (and a n 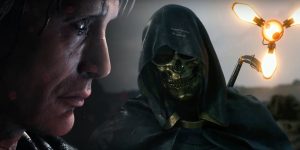 ew trailer), Kojima released a statement about the themes of Death Stranding and its gameplay:

People have created “Walls” and become accustomed to living in isolation.“Death Stranding” is a completely new type of action game, where the goal of the player is to reconnect isolated cities and a fragmented society. It is created so that all elements, including the story and gameplay, are bound together by the theme of the “Strand” or connection. As Sam Porter Bridges, you will attempt to bridge the divides in society, and in doing create new bonds or “Strands” with other players around the globe. Through your experience playing the game, I hope you’ll come to understand the true importance of forging connections with others.