When we last left The Walking Dead the show was in a better place than it has been for years. Thanks to the Whisperers, tension, and fear have now returned, giving the show an edge that it lost, something I thought would never return. Now it’s up to the show to keep that momentum going and while ‘Adaptation’ wasn’t necessarily bad, in the end, it was simply a pretty flat episode.

The show picks up right where we left off, Jesus being killed and the group scrambling to get out of the cemetery alive. They manage to escape and 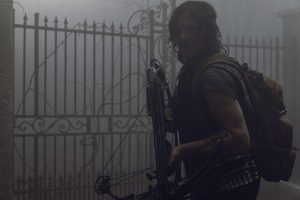 take the body of Jesus and a wounded Eugene with them, only to come face to face with some walkers/Whispers on a bridge. Daryl shows off his brain again (so many times this season already, it’s crazy) and they take a Whisperer named Lydia hostage, bringing her back to Hilltop and throwing her in jail for questioning.

As she is questioned it’s clear that she’s lying, something that will be proven without a doubt by the end of the episode, and once again we see Daryl show he can be a smart man when given the chance, thank you very much writing staff. Throughout this season we saw the writers give Daryl some actual dialogue and Norman Reedus is taking full advantage of it. I wonder if they are grooming him for more of a leadership type of role, especially with the announcement that Michonne/Danai Gurira is leaving next season. In any event, Michonne has shown she is a crappy leader so someone needs to step up and take the reins, especially with the new threat of the Whisperers here and not looking to go away any time soon.

I’m not sure what is going on with the whole Rosita/Eugene/Siddiq/Gabriel relationships. Rosita is involved with Gabriel, she admits she is pregnant a 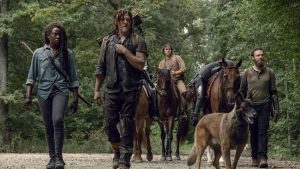 nd it’s not Gabriel’s kid and Eugene has feelings for Rosita…it’s too much like a bad soap opera for me. Besides Eugene back to being annoying as hell again, Gabriel has to be the worst choice in terms of making a romantic storyline. It just feels wrong and yet they continue to push his story in this awkward direction (first with Trash Lady and now Rosita).

The show also continues to tease us with the fact something big happened, something other than Rick’s “death”, as we listen to a conversation between Daryl and Michonne. Ok, Daryl took off and hid in the woods, Michonne has scars, Maggie is gone…we get it. Now how about some more information so we don’t have to listen to these bizarre, cryptic conversations that really make no sense.

We also saw Negan actually escape and go wandering around, eventually finding his way back to the Sanctuary. This was a good scene and Jeffrey Dean Morgan does a fine job at showing Negan’s frustration and realization that things can never be what they once were. So he hops on a motorbike and heads back to Hilltop where he promptly shot at by Judith, causing him to crash. The whole scene loses its credibility when no reason was given to why Judith was out there, other than the obvious fact to make this scene happen. Also, I’m not quite sure what the whole point of Negan escaping and then returning was, other than maybe to show that he’s not the man 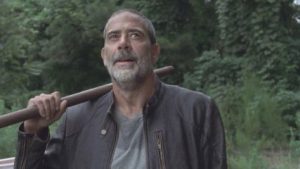 he was and can now be trusted. I’m hoping the show doesn’t wrap itself up in the stupidity blanket again because this is one leopard that will never change its spots. That being said, he could be useful when things got to hell with the Whisperers. We shall see.

The episode ends with Luke and Alden walking into a Whisperer’s trap, where we learn a little more about them and maybe say goodbye to one or both of these guys. I’m not really sure what the Whisperers rules are concerning hostages if they keep any alive at all, but I’m pretty sure that nothing good will come out of this little misstep.

‘Adaptation’ wasn’t a great episode but it certainly wasn’t bad, either. It was bookended by some great scenes and writing, with some really flat and shaking parts in the middle. I’m willing to forgive the show for now, as the season has been a vast improvement overall, but here’s hoping they don’t fall back into bad habits that made the last two season almost unwatchable.

Three and a half stars out of five

Dean Cain Has an Android Companion Just for You In “2050”