Aftermath Review and Recap Ep 5: “A Clatter and a Chatter”

This week’s episode of Aftermath was just as packed as the last, so if you haven’t yet, pop on over to my Fever of the Bone review and get yourself caught up.

RECAP: Episode 5: A Clatter and a Chatter

Running from a group of Fever Heads in a tank, the Copelands abruptly run into the ocean, even though Dana informs us that they’re 15 miles away from any shore. A la Arwen from Lord of the Rings, a figure on a white horse appears on the opposite bank and races to the rescue through the apparently thin layer of water that the RV couldn’t handle.

Karen’s military connections pay off again as she once more recognizes a dude in combat gear as someone from her air force days. Lamar “Booner” Boone reveals himself to be Wayne Brady and was an old flame from before Karen married Josh. He’s smarmy, he’s sexy, and he’s apparently the only law in a 30 mile radius, a fact he enforces by hanging people from bridges. But it’s okay because he’s still sweet on Karen, so he invites the entire crew to come stay at his compound, which everyone takes him up on because it’s the end of days, so what’s one more fanatic Prepper? 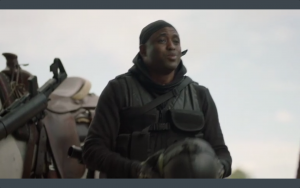 The End of the World: where the games are made up and the points don’t matter

Along the way, the family stops to investigate some big ol’ blood puddles on the side of the road and Dana is nearly swallowed by a funnoodle with a murder streak.  Josh calls it a Jubokko, which is a man-eating plant from Japan, and its next target is the RV. Just in time, some of Booner’s crew shows up and destroys it, allowing the family to get to the compound and for Dana to get a love interest. Martin is a part of Booner’s crew and is apparently way older than the 16-year-old science buff, a point that Matt is quick to bring up and that makes everyone watching uncomfortable as Martin uses that age old line: “Oh, but you seem so much older.” Don’t fall for it Dana, we’ve all been there and it never ends well. 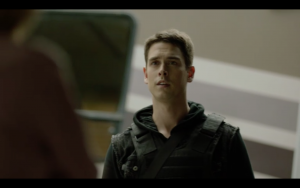 Martin you could get it…with someone your own age…

Once every one gets settled at Booner’s compound, Aunt Sally shows up in what is easily her third or fourth mad sprint this episode. She’s been running through the woods with Jeff, who has revealed that he’s caught the Fever and run out of medicine. The two have discovered that skinwalkers are now taking over Fever Heads and while Jeff fights one off, Aunt Sally reunites with her family.

Booner sends his crew out into the woods to round up all of the possessed Fever Heads and push them toward the compound so he can blow them up—no really. The episode ends with a lot of screaming and yet another “did they really just kill that person that quickly just like that” moment.

So what’d ya think: 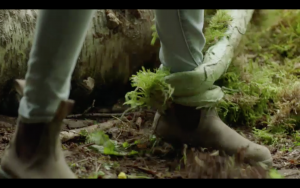 If you kids don’t start putting your pool toys away someone is going to trip and die…oh wait.

Wayne Brady was a fun addition to this episode. I’ve never seen him do something serious and scripted so I wasn’t sure what to expect but he dug his teeth into the crazy and let it rip. He and Anne Heche, who plays Karen, played well off one another with good chemistry and I honestly caught myself rooting for them to hook up. #sorrynotsorry

I’m not thrilled at yet another television show giving us the “she’s young but mature so it’s okay for an underage girl to get involved with an older guy” narrative but it’s the end of the world, so I guess you could make the argument that the regular rules are off (not that you SHOULD make that argument, but you COULD). But after a conversation between the Copeland siblings in which they discuss how Brianna may or may not have manipulated Dev a little bit despite the fact that she loves him, the show seems to be dipping its hands into how messy and unregulated real relationships are. It’s an interesting spice to a post-apocalyptic show about mythical creatures and violent zombies and I’m curious to see how they continue this theme.

Best Lines of This Episode:

“Toughen up or die, kid”

“We go to the Alamo on one condition—when the time comes, you shoot me.”

“You’re going back to hell or St.Louis, wherever you come from.”

Aftermath airs every Tuesday on the SyFy channel, but if you’re a web-watcher like me you can catch all the episodes online.  Check back next week, where I’ll be yelling at 16-year-olds to not kiss boys with assault rifles but cheering on the heroes anyway.

A Trip Through Nostalgia with Batman: Return of the Caped Crusaders