I don’t know of anyone in more need of a big hug than Frank Castle. In season one he lost his whole family, which transformed him into the vigilante we can’t help but root for. Season two continues this storyline, although he is now forced to battle a war on two fronts. Unfortunately, this also tests the patience of the viewer as the dual storylines don’t always work and left me frustrated at what might have been.

For Frank Castle, the questio 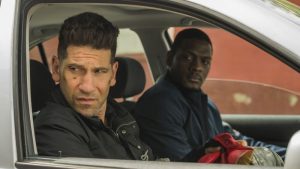 n is always the same: Is it possible for this man this man to be happy, to find any semblance of peace? In season one he did what he needed to do, tracked down and killed everyone, or left them wishing they were dead, who had a hand in his family’s death. So now what? As season two begins, we see a possible answer to that question. Now a free man, his endless roaming sees him stumble upon the possibility of something normal, even developing a romance with a bartender. However, it doesn’t take very long for the fists, knives, and bullets to start flying as Frank launches himself into a rescue mission that has the kind of complications only he could find. Peace, it seems, comes to Frank now only with the promise of violence.

The start of the season lays the groundwork for this complicated mess as the girl he tries to rescue Amy Bendix (Giorgia Whigham) is being hunted for some reason by some real top-notch baddies, including a former Neo-Nazi assassin who has found God, John Pilgrim (Josh Stewart) and his crazy ass billionaire handlers Anderson (Corbin Bernsen) and Eliza Schultz (Annette O’Toole). While this may sound great on paper, this is the part of the season two that left so much untapped potential on the table. 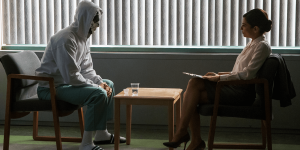 Pilgrim. He seems to almost be Frank’s twin, a man trying to leave his dark and ugly past behind him to find something more. Bernsen and O’Toole also could have had more to do as they both stunk of evil and chewed up the scenery in their own ways when they were in front of the camera. Sadly, they decided to go in other directions which is a shame because these three could have been so much more. Amy takes a while to warm up to as she comes across as more of a spoiled brat which is fine but too much potential was wasted there, especially how she becomes a better-developed character, someone we actually care about, and forms a meaningful bond with Frank.

These new characters also had to go up against the returning characters from last year, and a new face, which made up the second part of this season. This is where season two shines, digging deep behind the scarred masks of Frank, Billy Russo, and Dinah Madani. These three characters are broken, physically and mentally, and it’s fascinating to watch how they push themselves through their own personal chaos, trying to find some resolutions and not always with the best results. Billy Russo has been transformed from the charming, handsome two faced killer into Jigsaw, a psychologically tortured mess of a man. It is interesting to watch the wonderful job Ben Barnes does as Russo/Jigsaw, making him actually a sympathetic figure for most of the season. Barnes does some fine acting here, showing the struggle and pain with conviction. Hell, he had to act for long stretches with a mask on and his body movements sold the pain, anguish, and sorrow he was feeling.

Not to be outdone, Midani (Amber Rose Rivah) is in a bad state as well, stalking a bedridden Billy Russo as he recovers, hoping he never actually recovers. Her mental state, being used and shot in the head, puts her life and those around her in constant jeopardy, making me wonder how the hell she manages to keep her job. Even Frank’s longtime friend Curtis Holt (Jason R. Moore) feels tested by Castle’s increased violent behavior, testing their friendship and making him take a long look at himself and what he wants to do with his life. (It was good to see Curtis get some more character development and screen time this season as well).

Krista Dumont (Floriana Lima) is one of the most frustrating characters in this season. She could have been so much more, and Lima plays her well, than just another undeveloped character. Dumont obviously had her own issues and for a brief time she made Billy happy, both personally and professionally, but in the end, it was just too obvious what part she was going to play here. 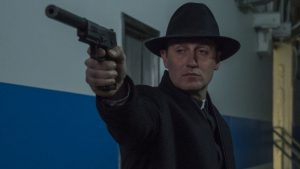 There is no doubt now that when you think of The Punisher, Jon Bernthal will come to mind. Season two was very good at not trying to make him good or bad, instead letting Bernthal take control and become a lethal ball of rage, a survivor living in grief and guilt, something in between or sometimes even both. With two seasons now under his belt playing Frank Castle, Bernthal had a firm grip on the character, knowing how to walk the fine line between grieving family man and a man who lives with violence as his best friend.

With the action top notch, the fight scenes in the bathroom and bar in the first episode alone were fantastic, and the central characters at the top of their game, everything was set for one hell of a season. Sadly, this was more like two seasons in one, with The Pilgrim/Amy part just not living up to the Russo/Midani/Holt/Castle part of the season. “The Whirlwind” was a great way to wrap things up, with some fine action scenes and character moments, especially the final scene. If this is indeed the end for The Punisher, and all signs point to it being canceled, it bows out on a high note and leaves a mental image that should make fans happy.

Three and a half stars out of five