Recently we had the chance to talk with Jeff Kober about his amazing career, including how the acting business has changed over the years and his role in the film Dead Sound.

Was acting something you always wanted to do, something that always interested you, or did you discover that later on?

Jeff: You know, I followed a woman to L.A. who wanted to be an actress, I didn’t know that people could actually be actors so it didn’t occur to me at the time. Then I stumbled into an acting class when my life fell apart, and I needed an organizing principle or place and someone suggested this class, so I went and I fell in love and literally couldn’t stop.

You’ve done a lot of work in movies and television over the years.

Do you have a favorite medium to work in or do you simply go where the work takes you?

Jeff: You know what, I just go where the work takes me, to be honest. It’s a different skill set to be on stage than to be doing television and it’s different to do film than it is television, it’s all different. I’ve been around long enough to be able to work in all of them and there’s something I find enjoyable in all of them.

Now you mentioned working on the stage. Do you think that’s something that every actor should experience, working in theater, or is it simply not for everyone?

Jeff: Oh yeah, I think everyone should experience it. You know in television and film you learn to really trust your editor and you’re willing to look like an idiot because you know they’re going to edit that part out. You can’t really be totally free unless you are willing to look silly. On stage if you look silly, you look silly, it’s there for everyone to see so it’s a whole other level of commitment and yeah, I think that’s something that every actor should experience.

Hollywood is at a strange crossroads right now. We the big blockbus

ter, the indie world but those thirty or forty million dollar films in between seem to have disappeared. Have the streaming services kind of filled that void or is that a different animal altogether?

Jeff: Yeah, they kind of have disappeared, haven’t they? You know what, I’ve got to tell you, with so many platforms right now I was assuming there would be more work but I’m not seeing it, really. I don’t know where it’s being done but they’re not calling me. (Laughs)

You’ve been in the acting business for a while now. What’s changed the most, from when you first started to where you are now in your career?

Jeff: There were a couple of things, and they probably started changing twenty, twenty-five years ago, and the first change was they used to hire the best person for the job, it didn’t matter if you had TV ‘likability’, foreign sales potential or not, if you were the best person for the role they would hire you, that has shifted. Also, a really big change from when I started out is the use of video assist initially, and now video, where the director is sometimes off the set and even quite removed from the set and watching on a little monitor. When I first started the director was right next to the camera and you could feel them pulling for you, almost conducting your performance by their reactions. There was something alive and communal about that experience that you can’t really find today.

ly over the years?

Jeff: Yes, yes I really have. I had a teacher, Ed Kay Martin, and he said you have three kinds of directors. You have the ones who will leave you alone, you have the ones that will get in your way and you have the rare few that will actually help your performance. The way I was taught to act was you learn to be equally as full and free and alive in anyone of those situations. That said, I’m not smart enough to always offer the best performance so when you have a really good director, Debra Granik, Mimi Leder, Clint Eastwood, I worked with these people, and they really helped with the performance. Most directors won’t help you out, they figure they hired you, you can do it, and you do it.

Acting is a tough profession to turn into a career. Did you ever have a backup plan or has it always been acting and nothing else?

Jeff: No, I never had a backup plan. There’s a guy, Michael Shurtleff, who wrote a book on auditioning years ago and he had the best advice for acting ever, which was if there is anything else you’re better at go do it. (laughs) This profession will break your heart and kill you and if you’ve been an actor as long as I have it’s because it’s what really turns you on, not because it’s a smart thing to do.

Ok, let’s talk about the movie Dead Sound and your role as Stone. How did you come to be involved with this film?

Jeff: Summer Crockett Moore and I did a movie together a while back and really had fun working with each other. She and her husband Tony Glazer are a producing team and I got to know Tony very well too and they just started asking me to do little projects with them and this was one of them. I have a standing order with my manager that if they call, I’ll go, I’ll do anything with them. They are really talented and very respectful of everyone at every level in this industry and the stuff they do, they’re quality projects. 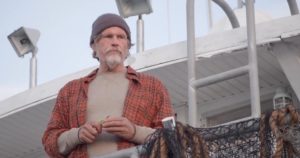 Do you enjoy working with a younger cast, as you did on Dead Sound, or do you have your own routine regardless of the project?

Jeff: My routine doesn’t change, no, regardless of what project I’m working on. Everyone on this shoot was delightful, it was a lot of fun, I just mostly glared at people from afar. There is one scene where I have a long monologue about the economic situation and how my life had been taken over by the wealthy industrialists. I speak that to one of the kids and he was right there with me, it was fun to torture him in that way. I couldn’t have done that with an older guy, that would be a different kind of torture.

What other projects do you have coming up?

Jeff: There’s a movie called Lie Exposed that I wrote and I’m acting in and it stars Leslie Hope and Bruce Greenwood, that’s being released in March. There is also a TV series I did with Summer and Tony called Big Dogs which I believe is going to be getting a release shortly and right now I’m working on General Hospital, so it’s a mix of different things. I enjoy whatever I’m doing, I have a very blessed life, I really do.