Ash and the Army of Darkness Review

The battle has been fought and won. Ash fought and defeated the Deadite image of himself and saved the world. Now all he wants to do is get home and have a normal life. Too bad he messed up the Book of the Dead incantation. Will Ash ever escape the land of the Deadites? Will he ever find his girl? Will he ever remember the last part of the incantation? Now an army of unbelievable horrors rules the land and only Ash can annoy them!

Darkness. This graphic novel collects issues #1-8 of his comic book series from Dynamite Entertainment. The book is full of the humour and heart that made the Evil Dead series a cult hit. But is this series a hit in comic book form?

The first thing that jumps its way off the page for me with this book is that the writers of the series have perfectly captured the attitude and demeanor of Ash right down to the sarcastic way that he speaks, the terminology he uses for the characters and how he interacts with the world. Heading into reading this book it really made me leery of that fact, because one of the main draws to the film franchise was that ‘devil may care, give everyone a heaping helping of wit and sarcasm’ that kept fans coming back for more. I did watch the films right before reading this so I could see how well they would be able to match up the character with the one that was present on my TV screen. The result is incredible; if there is anything they did right in this series, it’s the way that they have been able to convey Bruce Campbell into pen and ink form and bring him across to the reader perfectly. If things had gone differently and the writers had attempted to move him away from that type of character and had opted out of using some of his catchphrases and mannerisms, I really think that this series would have flopped right out of the gate.

The plot itself takes Ash back to the Dark Ages where he just left, and it shows just how crazy things have turned out. We catch up with Weird beard the wizard and how things have changed for him, as well as Duke Henry and King Arthur. Not only that, but Ash and Sheila catch up with each other, and their interactions pick up right where it left off from the film. The story is filled with the same amount of cheesy moments like in the film, but at the same time there is also some back story to Ash that we never dove into with the film series. There are a few flashbacks to when Ash was a child and delves into the fact that this is not the first time that he has had encounters with Deadites. It’s actually very well done and quite a treat to see how well the comic book series and the film Army of Darkness sync up with each other and acts really like a great addendum to the film. I know we all would like to see a sequel to that movie, but thanks to Steve Niles, Dennis Calero and Dynamite, we can at least keep up with our favourite S-Mart employee.

Beyond the excellent writing of the characters, the artwork in this book is spotty at best. It’s very inconsistent; in larger scenes where a great many characters are being pushed into a panel, the art style tends to turn the background into black shadows rather than any kind of detail. Shading styles also tend to vary throughout the book as well, where there are heavy lines on certain pages while on others there is a cross hatched style. The consistency of the art really does take away from what is a laser sharp story by Niles. The actual cover to the book and the subsequent covers that are included within are drawn so well that they leave incredibly high expectations for what is to come. Unfortunately, once inside the book there is very little detail, and faces are consistently off. It seems like photo reference material was being used to draw characters that appeared in the movies, but then in other panels it appears that the quality slips when faces are at angles. There are also some pretty glaring mistakes with the overall colouring of the book as well; one example is Ash’s mechanical hand, which in some panels is coloured silver, and others it is flesh coloured. There is a lacking attention to detail in the art department with this book. 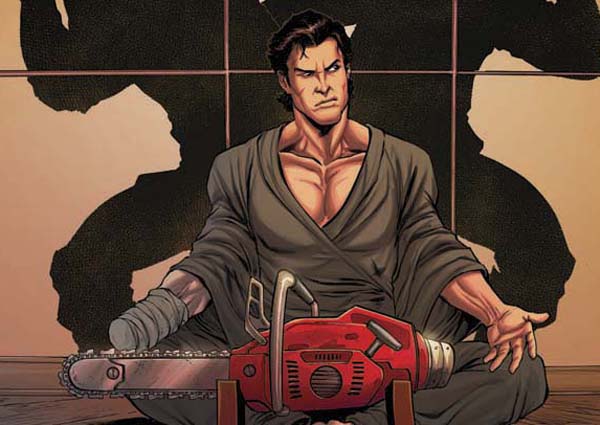 I’m a huge Evil Dead fan so I was really excited for this book as it continued right off the end of Army of Darkness, and even gave a fresh start to new readers as well. So, if you are a fan of the Evil Dead series and Ash, this is a great read for the fans, as Ash’s personality is captured perfectly and the characters voice shines through to the reader. However, there are some fairly glaring issues with the artwork, but luckily the overall story keeps this readable.

Pick up the graphic novel Ash and the Army of Darkness at your local comic book shops beginning on September 24th.

Six Reasons Why You Should Check Out HULLABALOO This Instant!

Now a contributing writer for the GCE, Michael has been life long gamer since the days of NES. A super fan of Game of Thrones, Walking Dead, Batman, Star Wars, and all things Marvel Comics, Michael considers himself a complete pop culture addict.