Well, after two straight episodes of insanity, creepiness and a boatload of characters, the creators decided to pull the reins back a bit and give us some personal back stories and some time to reflect on past sins. New characters still managed to make their way into the episode as well as some foreshadowing of a possible clown showdown in the very near future.

Ethel (Kathy Bates) gets most of the pivotal moments of this episode to herself, beginning with a touching moment with a doctor who delivers some bad news regarding her health. The best part of this exchange was hearing Ethel thank the doctor for treating her like a human being. This leads to a conversation between Dell and Ethel, while sharing swigs from a flask, that shows there was once and still is true feelings between these two. 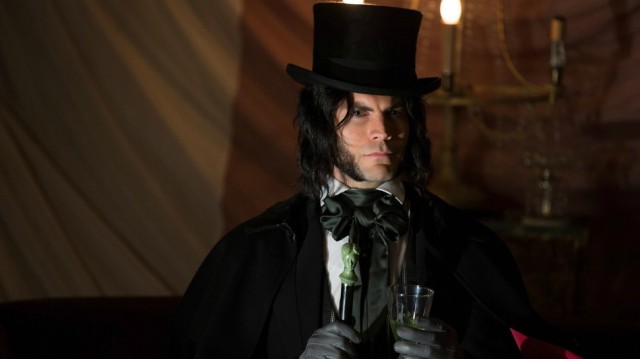 Ethel also gets the job of explaining why the freak show does not perform on Halloween. It seems Edward Mordrake (Wes Bentley) who led a sorry life, what with having an extra face on the back of his head and all, and after being put in an asylum and then escaping to a freak show thought he had finally found a family of his own. However, that second face is rather evil and its continued whispers lead him to kill before he hangs himself. So now anyone who performs on Halloween risks bringing Mordrake back to claim another life.

This is one of those American Horror Story moments where you shouldn’t think too much about the story line they just threw your way and instead just nod, accept it and move on.

It was also nice to see some more familiar faces brought back into the fold. Emma Roberts and Dennis O’Hare join the cast as Maggie Esmerelda and ‘Dr’. Stanley Mansfield. They enter the freak show intent on making a buck with Esmerelda posing as clairvoyant, crystal ball and all, and Mansfield… well, we know from his Viking encounter that he’s got something up his… pant leg. (Don’t ask, just watch and enjoy.)

Oh yes, and let’s not forget about Twisty the Clown, his growing collection of playmates and his new partner in crime. Dandy is becoming more deranged and uncontrollable with each passing episode, as shown with his little tirade about the costume Gloria made him. His response? Make his own costume, which just happens to be another creepy looking clown ensemble. Hats off to the people behind the scenes who came up with not just one, but now two creepy clown outfits. Well done.

Over in the headliners tent, things aren’t going so well for the between the singing heads. Dot and Bette are headed for a showdown, and the dual nightmare/dream sequence leaves little doubt it will be sooner than later. Jealousy and promise of a better life has given Dot no qualms about killing off her conjoined twin, although I’m pretty sure it won’t be as simple as that. I’m sure it would make Elsa happy, whose jealousy at this point has been tempered only by the whispered words that she still has a chance at being a superstar with the arrival of a man of power.

That leads Elsa to perform another tune (another beauty by Lange) and bringing forth something that she dissmed earlier as simple superstition and nonsense.

That superstition and nonsense visits Ethel and Kathy Bates has one last shining moment in this episode as she is forced to relive not only her slide into oblivion but the one true horror and disgrace she has been hiding for many years.

‘Edward Mondrake’ is only part one, which tells me that some story lines started in this episode might actually wrap up next week. However, being American Horror Story, the only thing one can be sure of is nothing is off limits to the creators and talent behind this show.

The Rise of Ambrose